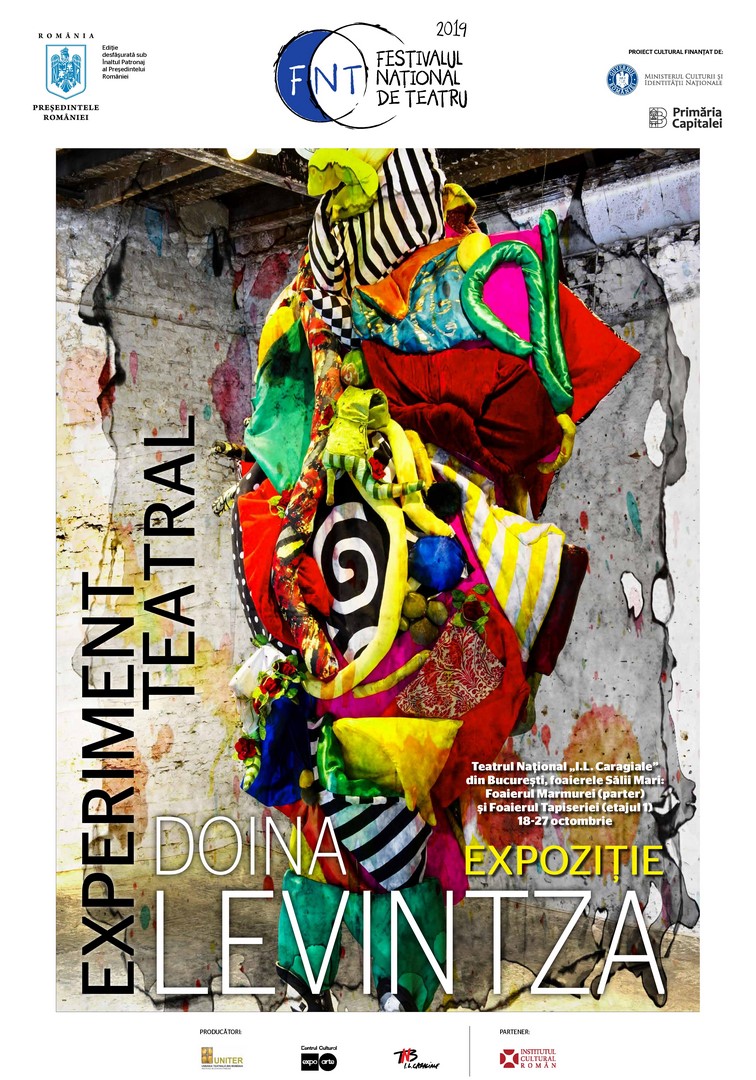 Doina Levintza – the brand or, simply, the artist – does not need any introduction. The simple pronunciation or reading of this (already!) patronymic creates from the very beginning a sort of expectation, of a unique aesthetics. The famous artist takes part in the National Theatre Festival for the fourth time, this time with an exquisite costume exhibition hosted by the central foyers (“Marmura” and “Tapiserii”) of the Big Hall of the National Theatre. It is not by chance that he exhibition, which ennobles the official opening of NTF 2019, bears the name “Doina Levintza – Theatrical Experiment”.

“The theatre costume, just like theatre in general, can be an experiment; and the experiment itself is a performance. That is why, starting from few representative performances of my artistic creation, I have gathered several unexpected figures, an explosion of colour, forms and impressive volumes.

The costume is part of the spectator’s mechanism and can generate totally unpredictable directions. One needs to offer the viewers, as well as the wearer, the freedom to add nuances and sensations to their costume story.

The theatre costume is not always a common piece of clothing; it needs to leave space for experimenting, generate a creative energy, seduce and impress.

There are no rules… there are millions ideas and fabric that, put together, will create the Performance.” – Doina Levintza

The creations chosen to be displayed, reinterpreted by Doina Levintza herself, propose an innovative formula of theatre costume in an artistic manifesto in its own right: an attempt to recalibrate the significance of the costume, be it initially created to fit the atmosphere of a performance, or meant to stress some character traits. The theatre costume, in the new light in which it creator introduces it to us, gains value in its meaning, it becomes a symbol which speaks of the perennial character of the most ephemeral of all arts: theatre.

“The history of Romanian theatre is imbued with the huge value of few world-class designers. Among them, Doina Levinta: an artist who worked with the biggest director, and every time she discovered her own language, alongside the nuances of each collaboration. Her elaborate work, her defined and redefined style, the extent to which she worked visually and chromatically on proportions, her research and the costume sketches for each character of classical plays as well as new ones, they have always been doubled by her incredibly remarkable passion and rare dedication. For us, the audience, keep alive the memory of some famous performances that we have witnessed in the last 30 years that the National Theatre Festival is celebrating this year.

Memorable moments, landmarks in which the director’s vision and the originality of each theatre discourse have elegantly and amply weaved with the sumptuousness and the colour symbols used in Doina Levintza’s design… Touching stories in which the Costume itself has been a protagonist.” – Marina Constantinescu.