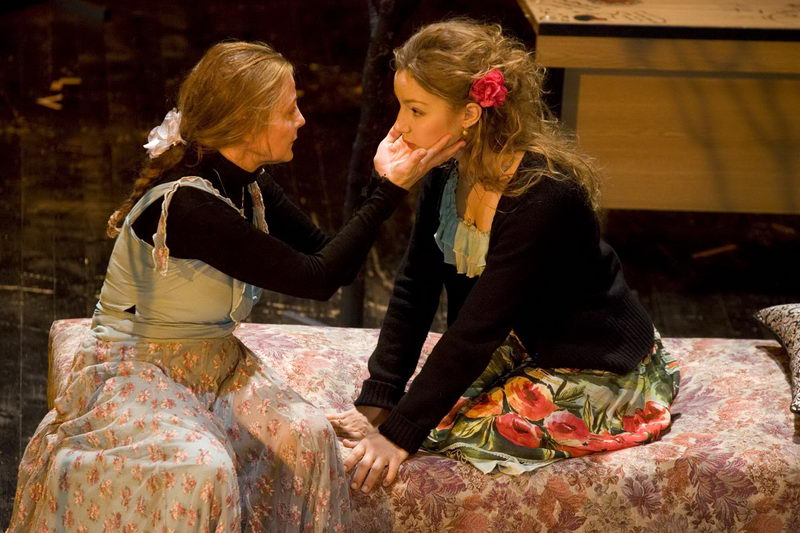 However different from one another, the young creators who participate in the [b]Theater of tomorrow[/b] section of the National Theater Festival share a common interest in topical dramatic texts, a preference for direct means of expression with immediate impact on the audience, the latest technical resources, fraternizing with the theatergoers – as young as themselves – who usually come to their shows. Concerned with subjects like emigration, self-perception, disability, mass-media and intergenerational conflict, the stage director Ioana Păun explores them in interactive shows, using new technologies to attract and directly involve the audience in the performance. She is supported in this project by Mona Bozdog and Mihaela Michailov, who coauthored [b][i]TV for Dummies – a Show for 100 Remote Controls[/i][/b], produced by the oldest performing arts institution of Romania – Vasile Alecsandri National Theater in Iaşi. Scheduled on Monday, 31 October, at 18.00 and 22.00 at the Bucharest National Theater ‘s Atelier Hall, the show tells the story of an eight-year-old child’s disappearance and its being blown out of proportion by television, using video installations and media techniques. Monday, 31 October, at 22.00 and Tuesday, 1 November, also at 22.00 we are invited to ACT Theater to watch a cinema on stage show inspired from a real story. [b][i]9 Degrees in Paris[/i][/b] is the portrait of a woman at a crucial moment in her life. The author of the script and director of the show, Peter Kerek, follows the plot from two different perspectives, theatrical and cinematographic. In his vision, the two means of expression intersect, contradict and attract each other: “We are curious to know how much theater can cinema absorb and, conversely, how much cinema is theater willing to take.” We will unravel this enigma with Alina Berzunţeanu, who plays a role that tests both her theatrical and movie-acting skills. A recipient in 2010 of the Alfred Radok Best Play of the Year award in the Czech Republic, [b][i]Purification[/i][/b] by Petr Zelenka has found a new theatrical identity in the production of Alexandru Mâzgăreanu, scheduled Tuesday, 1 November, at 18.00 and Wednesday, 2 November, at 20.00 at the Bucharest National Theater ‘s Atelier Hall. After having demonstrated his professional talent in several unanimously acclaimed productions – [i]The Bureaucrats[/i] after A.P. Chekhov (Metropolis Theater, 2010), [i]True West[/i] by Sam Shepard (Nottara Theater, 2010), [i]Dear Elena Sergeyevna[/i] by Ludmila Razumovskaya (produced in the OPERA PRIMA project at the New Hall of the Comedy Theater) and [i]Because He Can[/i] by Arthur Kopit (Odeon Theater, 2011), Alexandru Mâzgăreanu invites us to a debate on guilt and compromise, supported by an excellent cast: Adrian Titieni, Medeea Marinescu, Ilinca Goia, Lamia Beligan, Mihai Călin, Afrodita Androne, Cesonia Postelnicu, Natalia Călin, Brânduşa Mircea, Armand Calotă, Vitalie Bichir, Tomi Cristin, Marcelo Cobzariu and the child Vlad Roşu. The young directors’ team at the 21st edition of the NTF in the Theater of tomorrow section is completed by Alexandru Mihail, a NUTCA graduate, currently a student of stage directing at Yale School of Drama in the US. His production of [i]Black Comedy[/i] by Peter Shaffer received in 2006 UNITER’s Debut Award and the Best Director Award at the Comedy for YOUth Gala. Now Alexandru Mihail brings a bitter comedy on the stage of Odeon Theater’s Studio Hall on Thursday, 3 November, 20.30 and Friday, 4 November, 18.00): [i]Tickled Off[/i] by Gabriel Pintilei, a winner of the Young Directors – Contemporary Texts contest initiated by Odeon Theater, tells the story of an ordinary Romanian family seen through the eyes of a child. For her role in the show, The actress Ioana Anastasia Anton (UNITER Debut Award in 2008) received the Best Actress in a Supporting Role Award at the Festival of Romanian Comedy (FestCo) in 2011.