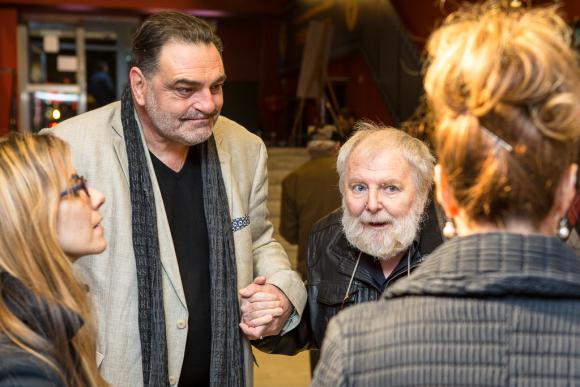 The tense, emotional atmosphere that has taken over Bucharest after the tragedy on Friday night has inevitably left its mark on the special event: the screening of one of the most viewed Romanian films: ”De ce trag clopotele, Mitică?” (“Carnival Scenes”), that took place on Saturday, October 31st at Cinema Studio, in honor of the legendary director Lucian Pintilie and in presence of personalities like actor Mircea Diaconu, Marie France Ionesco, the NTF director Marina Constantinescu and film director Laurențiu Damian.

An article by Cristina Enescu

After a moment of silence in memory of the victims, prior to the screening, actor Mircea Diaconu spoke about Lucian Pintilie’s personality and colossal destiny, while fragments of the making off, in black and white were running on screen. (The images ran as a courtesy of the Romanian Filmmakers Union UCIN). “Without Lucian Pintilie, Romanian theatre wouldn’t have the same energy today”, said actor Mircea Diaconu, one of the protagonists of the film.

This monumental film in Romanian cinema, Mircea Diaconu said, “was locked in a safe of the Ministry of Culture and Socialist Education in the 90s, because it was the sign of the come-back of the maestro to Romania and Romanian cinema.

Mircea Diaconu,  who played the part of Iordache, remembered the context in which this film was made: ”There wasn’t much talking about Lucian Pinitlie’s leaving Romania. At the moment of “The Government Inspector” (a performance that was held by the communist authorities in 1972), I was 21. This performance blazed a trail for the Romanian theatrical culture. I remember there was a discussion after the performance, at the History Museum, one that took about 9-10 hours. The Bulandra theatre was at that moment hewed for this “shameful deed”. Lucian Pintilie’s returning  was like a sort of an attempt to reconcile. In 1980 he accepted to do this film, it was a miracle that it was being made and everyone was talking about it. Mr. Pintilie did never allow anyone to assist the rehearsals with the actors. In two weeks, the first filmed material was ready. He came to us and said: “I think I failed completely. I wanted to make you all schmendricks / and you’re so lovely!”…he was mad, angry. I think this is the key trough which this film impressed entire generations.  This film is all one can want in a career. There are several layers in sound, a world constructed on several levels.”

Laurențiu Damian spoke about the « joy and the rationality of the point of view” in Lucian Pintilie’s work. Noticing that the audience wasn’t very numerous, he evoked George Enescu’s words, who asserted that he’d play, even if there wasn’t more than one person to listen. “Therefore, do not live with the impression that the house isn’t full tonight”, the director added.