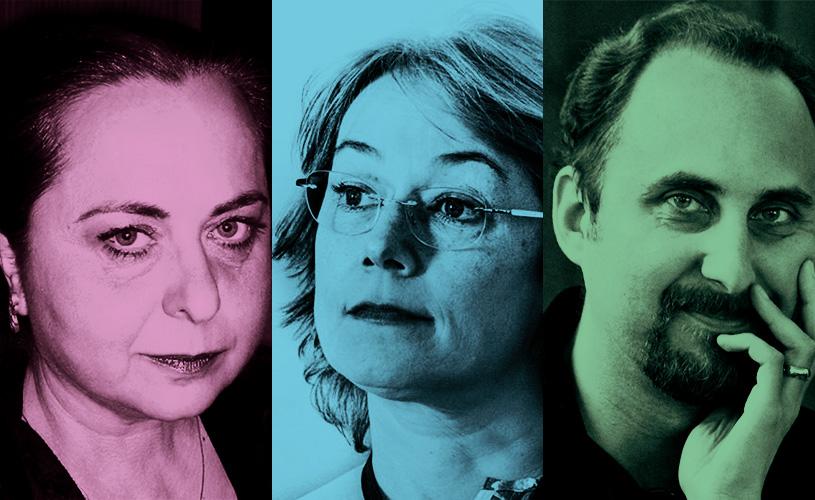 The 2020 of the NTF is like no other before. It’s different, just like we are different now.

In the spring of this year, when we agreed to be part of the board of the current edition, we were optimistic and believed that NTF 2020 will be the same as always. With a Bucharest bathing in the sun or the rains of the end of October, with that unmistakable commotion of the theatrical celebration, with foyers in which people found each other again, hugged each other and experienced the joy of being together again, with venues overfilled with energies, emotions and… normality. NTF 30 was meant to be part of a vast program, an enthusiastic and, at the same time, honest “revisiting” of the past of the National Theater Festival, meant to bring in nostalgia, but also possible answers to the question: what were we and where are we now in Romanian theater?

In summer 2020, we were still enthusiastic. In parallel with the Best of selection, we chose the productions of the first part of the 2019-2020 season. We still believed that the virtual program will run along the real one, that the online space will be nothing more than an apostrophe applied to the real space. At the end of august, the month in which Chekhov’s orchards are sold, a shakespearean refrain became more and more audible and in September we knew it, we knew that “the time is out of joint”, and wanting to remain the same has become an impossibility. The festival could be nothing but different, online, that is…

We decided to build a concept based almost exclusively on revisiting the history of the NTF in the last three decades. A new wave of optimism stormed us, because such a theatrical archeology seemed noble and useful to us. Not forgetting, preserving memory, here’s something worth doing in times of the pandemic, we thought! But soon we understood that building a video- NTF was more complicated than it seemed. Especially in Romania, where filming theatre productions- otherwise than with a mobile phone, or by the goodwill of an “acquaintance- owning-a-camera” has not become a common practice yet. The tens, maybe hundreds of hours we spent searching in video archives gradually led us to selection criteria we had normally despised, like the technical quality of recording.

The selection proces had to consider aesthetic and technical constraints, artistic high points and accuracy of the recording, persistence in memory and material  persistence. A diverse range of contradictory feelings came up along this furious search for our theatrical video-past: the astonishment to find how there is nothing more that unusable debris remaining of, oh, how many flagship productions, the fear that our theatrical identity in recent decades is, alas!, so fragile, but also the limitless joy of discovering a saved performance, the enthusiasm of getting on new tracks (productions filmed by Romanian Television, or preserved in theatre archives!), the agony and the extasy of a game of life and death of the art…

Finally, we had to face one last challenge: “the online broadcasting rights”. The Romanian theatrical patrimony, we found on this occasion, does not belong to everyone, but only to some, who can choose to show it to us or keep it to themselves. Can anyone imagine the great art of the world being removed from the public space and  locked away in private hides?!

The current edition of the NTF involuntarily mirrors another line from Hamlet: “with one eye merry and the other crying”; laughing and crying masks… This ancient dual principle of theater representation is no longer just a form of coexistence of comedic and tragic, but of hope and anxiety, bloom and gloom of all kinds. Restlessness and Memory are the polarities that define the NTF 2020. Their substance is to be found in the obligatory meditations on present and future, in the Aesthetics of the Pandemic, in dialogues, conferences and exhibitions.

The great friend of the NTF, Professor George Banu, disguised either as ever-present, ever-inspired, Puck, or as old Firs, bringing wisdom in times of crisis, accompanied us all along this journey. The team of UNITER, with its catalysing energy, was the support that turned our efforts into reality. The national television and radio stations (TVR and Radiodifuziunea Română)  stood by us, with passion and faith in the arts.

We thank them all!

UNCLE VANYA by Anton Pavlovich Chekhov, translated into Hungarian by Zsuzsánna Koros-Fekete, based on the English translation by Paul Schmidt, translated into Romanian by Andrei Şerban and Kinga Kovács, directed by Andrei Șerban, set design by Carmencita Brojboiu, Hungarian Theatre of Cluj

The art of the great ACTOR

THE ACTOR, after Mircea Dinescu, with Mihai Mălaimare and Mircea Tiberian, written and directed by Mihai Mălaimare, co-production Masca Theatre, Bucharest and TVR

FREAK SHOW THE MOVIE, a film inspired din by the theatre performance FREAK SHOW, by and with Florin Piersic Jr., produced by SpiderFilm

DIARY OF A MADMAN by N.V. Gogol, with Marius Manole and Alexander Bălănescu, stage version and directed by Felix Alexa, ARCUB –Cultural Centre of the Bucharest Municipality

THE HUMAN VOICE by Jean Cocteau, translated by Manase Radnev, with Valeria Seciu, adapted for television and directed by Cătălina Buzoianu, produced by TVR

THE ROAD OF THE TRILOGY– Andrei Șerban, directed by and photographed by Alexandru Doru Spătaru, produced by TVR

FAUST, THE PATH OF THE MOMENT– Silviu Purcărete, written and directed by Laurențiu Damian, produced by Editura Video (Minsitry of Culture)

THE HISTORY OF A PERFORMANCE– Gigi Căciuleanu, directed by Andrei Măgălie, produced by TVR

THE MAGIC OF THEATRE AND FILM – Alexa Visarion, a film by Liliana Chițescu, produced by TVR

A CERTAIN STATE OF MIND– Alexandru Darie, a film by Alexandra Grigorescu-Ares, produced by TVR

A HAPPENING WITH JAZZ – Miriam Răducanu, a film- essay by Mircea Albuțiu

THE MAGICIAN KING– Ștefan Iordache, a film by Ludmila Patlanjoglu

The Aesthetics of the Pandemic

Colloquium: „Theatre at the Limit. The Aesthetics of the Pandemic”. Moderators Ludmila Patlanjoglu and Călin Ciobotari

DEATH KNOCKS, performed reading LIVE, 360°, with Maia Morgenstern and Mircea Rusu, after a text by Woody Allen, a concept by Florin Ghioca, a project of the “I.L. Caragiale” National Theatre, Bucharest

POOL (NO WATER) by Mark Ravenhill, a project by Radu Nica, Andu Dumitrescu and Vlaicu Golcea, Hungarian Theatre of Cluj

DOCTOR IN SPITE OF HIMSELF by Molière

THE GARDENS OF MURCIA by Josep Feliu i Codina

THE OVERCOAT by N.V. Gogol

A MOLDAVIAN REHEARSAL OR WE AND WE AGAIN by Costache Caragiale

LIFE IS A DREAM by Calderón by la Barca

PLAYING WITH PHANTASMS by Cristian Munteanu, directed by Adrian Pintea

TO WHERE YON STAR APPEARS– a poetic biography, the life and work of Mihai Eminescu, selected and directed by Gavriil Pinte

OVIDIU – THE EXILED ON THE SHORES OF PONTUS EUXINUS, after „Tristia and Epistolae ex Ponto”, selected and directed by Gavriil Pinte

EXPLOSIVE by Elise Wilk, adapted for radio and directed by Mihnea Chelaru

THE METAMORPHOSIS, after the novella by Franz Kafka, written and directed by Ion Andrei Puican