An encounter with David Esrig and Marin Moraru 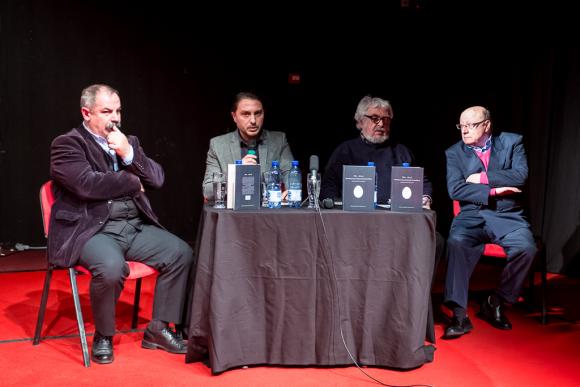 Friday, at 17.00, at the Small Hall of the Metropolis Theatre Bucharest, Florin Vidamski launched the book „The Road to the Performance by the David Esrig Method” (Charmides Publishing House, Bistriţa, 2015), an important study dedicated to the acting method used by David Esrig  for over twenty years at the Athanor  Academy in Passau, Germany.

The study is also the PhD thesis of actor and educator Florin Vidamski. David Esrig (80) was present at the book launch together with his special guest, actor Marin Moraru.

The theatre that I practiced and built by a methodical approach emerges out of my belief that art is, first of all, a journey we lived through together and less just a finite good, offered to others. This feature was captured in this work, which precisely documents the transition I call “from information to inspiration”, so David Esrig.

The author of the famous performances “Rameau’s Nephew” and “Troilus and Cresida”, said that the method was born out of a very acute necessity, at a time when “talent meant much, much more than understanding”.

“There were great actors then, very powerful, they performed a Stanislavski type theatre- it was very forceful”.

What David Esrig invited them to do was that they act so as their theatre “remains in a contact of sense and sensibility with our existence as humans, with what we are and with what our essence is”.

“A new text analysis” is the element of change in the approach to the working on a performance. Stanislavski himself did not speak about a text, but about a «verbal action». Not words are the problem, but the reason why words are being uttered. What is the intention and what’s the purpose? When speaking on stage becomes acting, that’s the moment when it gets thrilling. Otherwise, I’ll stay home and read in my armchair and that’s much more comfortable than the seat at the theatre”, David Esrig explained.

„Conflict is the higher form of organizing action“.

„We were spending hours and hours talking about theses tings around our rehearsal table- nobody does that any longer”, Marin Moraru added.

„When we felt we couldn’t remain around the table any longer, when it was burning inside of us, we went on stage and we started- but with doing actions instead of with saying words. I don’t know how to stage words. I’ve learned how to stage actions. Actions mean people who are alive, driven by powerful impulses, in a given space. So, first of all, working through the text. When we set down to analyze a text, we didn’t start from its literary virtues. I worked 8 or 9 months on a show”, David Esrig said.

Marin Moraru recalled how David Esrig „always did his homework” and wanted to draw on stage all he had imagined. „We always said: why do this and that, it’s better the other way round…all sorts of tergiversations an actor knows how to play with in his relationship with the director. But then I saw that what he wanted suited me well, wrapped my soul well, I finally accepted. It has hard in the beginning, but habitude is the second nature. And I succeded doing things I never thought I’d manage to do”.