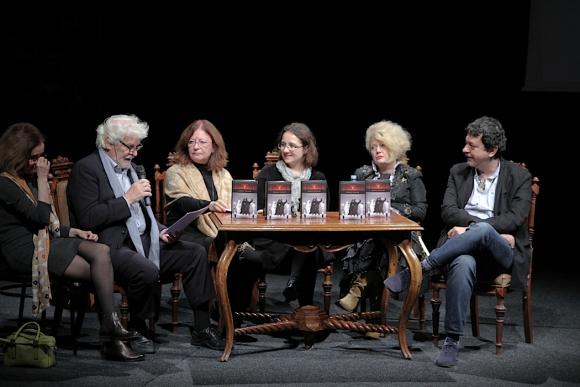 “Letters about Theatre” by Giorgio Strehler was launched on Tuesday at the “Toma Caragiu” Hall of the Bulandra Theatre, in presence of numerous admirers of his theatre. The Italian director said about himself that he is part of the “huge kind of fanaticists, mysticists and, at the same time, of revolutionaries”.

Invited to the event was Mario Mattia Giorgetti, editor in chief of the Italian magazine Sipario, who knew and worked in his young years together with Strehler, the great theatre maker was one of the founders of Piccolo Teatro in Milano. Giorgetti came to Bucharest to speak about Strehler and to present a documentary film about him: “La passione teatrale di Giorgio Strehler”.

Alice Georgescu spoke about the pleasant effort of translating the book. The manager of the Bulandra Theatre, Alexandru Darie, former director of the European Theatre Union, founded by Strehler, recalled the moment when met “il Maestro”, at the beginning of the 90s at the Piccolo Teatro, where he presented his first successful performance, Bulandra’s “A Winter’s Tale”. Monica Andronescu, the editor of the book spoke about the emergence of the idea of having the book translated, whereas the director of Centrului Cultural Casa Artelor, Alice Barb, promised support for the publishing of the second volume of Giorgio Strehler’s work. Mario Mattia Giorgetti said: “What was it Strehler expected from theatre? I can retrieve his words to the actors in my 50 years old notes: Theatre for me is like water for the fish: it’s a way of loving things, of loving the world, of loving our peers. And I think about everything else through theatre. I see politics through theatre, I see culture, I see mankind”.