„Medea” at the NTF 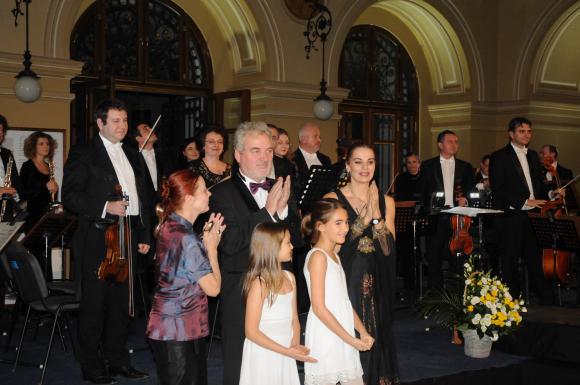 A special event within the National Theatre Festival took place on Saturday night in the Marble Hall of the Romanian National Bank: the performance of „Medea” by Jiri Anton Benda, performed by the chamber orchestra „Virtuozii” conducted by Horia Andreescu, with the extraordinary participation of actors Maia Morgensterm, Teo Corban and Rodica Negrea.

An article by Maria Sârbu

Adrian Vasilescu, the counselor of the governor of the National Bank of Romania and the host of the evening started the opening speech with an invitation to a moment of silence as an homage to those you lost their lives after the tragedy on Friday night in a club in Bucharest.

Mircea Vasilescu motivated the idea of this presentation: “We are present tonight on the stage of National Culture. Here, at the National Bank, we do organize events with a precise goal, that of ensuring a fundament, to participate with our capacities, our knowledge, to the process of financial education and of economic culture. Topics like: the culture of interest, the culture of money circulation, the culture of circulation of prices and many other types of culture of the economic activity. We do this because history has proven that people who are not educated do not have a chance in economy and in life. This is why we are present in the cultural circuit”.

NTF director, Marina Constantinescu,  thanked the National Bank of Romania for the generous gesture of hosting this evening asserting that: „The National Theatre Festival and UNITER are the organizers of a unique show – «Medea». We could not have accomplished this project without the support of Governor Mugur Isărescu and without the passionate and devoted support, I would even say without the love and appreciation Adrian Vasilescu has for value. The National Theatre Festival offers this presentation of «Medea» tonight to all theatre makers, friends, sponsors, medical doctors, to all those who were steadily on our side. It is a unique evening: „Medea”, performed by the chamber orchestra „Virtuozii” conducted by Horia Andreescu, with the extraordinary participation of three fantastic actors Maia Morgensterm, Teo Corban and Rodica Negrea. We are certain that this evening will unite us even more, will strengthen our exercise of solidarity dedicated to value, in any domain, in any territory, and will feed our hope that, on the long run, culture is the most complex and noble investment. We do admire culture, we accept it with our souls and minds. We need to practice this exercise of admiration of values, now and forever”.

„Medea” profoundly impressed the audience. The18th century music was absorbed by the occupants of the seats, but also by the walls of this building with a noble, aristocratic architecture. The members of the „Virtuozii” orchestra, with their instruments, their conductor, Horia Andreescu, made the music float above the heads. The texts spoken by actors Maia Morgenstern, Rodica Negrea and Teo Corban added substance to the evening.

„Medea” is a one act melodrama written by the Czech composer Jiri Anton Benda and the German libretto-writer Friedrich Wilhelm Götter. The premiere took place in 1775, in Leipzig. „Medea” is considered to be one of the best musical pieces written by Benda, and one of the most influential of the end of the 18th century.