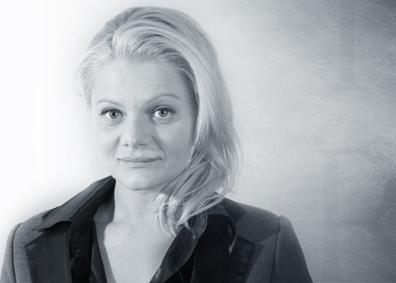 Warning! You are starting to read a long interview with actress Ofelia Popii. But it’s worth every single line. You will learn about the role that prompter Sandi plays in the way Ofelia’s career shapes up, how her eye color changes according to partially unidentified theatrical factors and that she’d like to work with any theatre in Romania and abroad, that she’d love to be wise as goddess Sophia and, most importantly, that she’d continue playing in case theatre would be, let’s say, prohibited- she’d perform in basements or in the mountains. For Ofelia Popii the National Theatre Festival is first of all the occasion of getting together with dear friends.

An interview by Andrei Crăciun

What does Sibiu offer to an actor like Ofelia Popii?

Great directors and interesting projects; tours in- and outside the country, as well as the tranquility in between two projects.

And to a family of actors (n.r. /Ofelia is married to actor Ciprian Scurtea)? Many just can’t imagine how that’d be like to have an actor and an actress live under the same roof. How is it?

Since we are very much alike, we share our passion for theatre and our hobbies, we do feel very well together on stage and in our free time. I think it’s normal, natural like that.

If I’m not mistaken, Ofelia means support- and this is why your mother chose this name for you. What name would you have chosen for yourself?

I like Sofia very much, but I’m far from being wise (n.r. / Sophia was the goddess of wisdom in Greek mythology).I can only hope that my daughter, to whom I conveyed this name, will be closer to wisdom than I am.

OFELIA POPII MISSED HER ADMISSION IN THEATRE SCHOOL TWICE- SHE WAS EITHER OR TOO RELAXED OR TOO TENSE .

Would you leave Sibiu? And, if yes, to go where? Bucharest? Abroad?

I’d love to collaborate in other theatres, in- or outside Romania. I’d love to work with as many actors as possible, but unfortunately there haven’t been to many offers so far, or they didn’t come at the right moment, when a collaboration would have been possible. Seldom have I gone out of Sibiu, unfortunately. Maybe the future will bring more and more interesting offers and I’ll play in other theatres as well. This year I worked at the theatre in Stuttgart with Armin Petras and it was fantastic.  I met a wonderful director, wonderful actors and a technical crew of great professional level. Also with Gianina Cărbunariu’s project -„Common People” / we work in England and in Italy and the premiere will be in Sibiu in January 2016 (the project is in course).

I know you were close to moving to France at some point- is this still an option?

It wasn’t about moving to France, it was about working on a performance there. And it didn’t happen. It’s not an option any longer, the project was done with another actress, since I couldn’t go.

Tell us about the Children’s Palace in Arad, where you started your artistic career.

It’s a bit exaggerated to say “artistic career” speaking of the game that I thought/ I felt theatre was back then…In fact I didn’t think of acting, I was just playing. It was a beautiful time, pure, free. My teacher, Mrs. Popa Penelopam allowed me to do whatever crossed my mind and this was stimulating me. After the time spent at the Children’s Pallace, I went to an amateur drama school, led by late actress Emilia Dima Jurcă. She played a very important role in my quite unconscious decision to go to drama school…

You were much appreciated at regional contests of reciting poetry. How many times did you win?

Yes, when I was little, I participated into all kinds of contest and I got prizes almost all the time. They didn’t mean much to me though, at least I can’t remember. I didn’t count. My mother used to keep the diplomas, but I never looked for them, since I grew up.

You auditioned twice for drama school in Bucharest and weren’t accepted. Why? You then went to Cluj. Why did you chose to go study in Cluj?

I went to the exam because of a sudden impulse. In the first year, I missed because the mark I got at the last discipline was not good enough. I guess it was this improvisation exam, that year it was improvisation on text.  I got a little piece of paper with some text on it. I read it. I didn’t know I was supposed to improvise. I simply read that phrase and returned the paper.

In the second year, I really wished I’d get in. I had spent a year consuming myself because of the first failure, so when I got there I wasn’t that nonchalant any longer. I think I was rather tense. Maybe this dragged me down, I don’t know. In Cluj, exams started a bit later, so I had enough time to retrieve my candidate’s file from the school in Bucharest and go there- I had no other option. And they had about two weeks of preparation there, you could understand what you are asked to do at the exam and also professors could get to know you better than in those few minutes of examination. It was a crucial experience to me, as it seems.

Do you regret not having pursued a career in economic sciences, as you thought you’d do during high school?

Not at all. I knew I was not connected to that profession at all. Now I can’t even understand how I made a final exam in economics.

How did the birth of your daughter change you?

Life seems much, much more beautiful when I look at her. And let me clear things: I’ve always loved life. But she just reminded me how that feels like to wake up in the morning and feel happy for no particular reason. I recalled that the purpose of life is to be happy. Not sure why, but I had forgotten that.

Which part do you like more Lulu or the marginal Bess?

Both, of course! And many others.

Which show:  Slices or Faust?

Both. Why choose one, when they complete each other so beautifully?

Where would you have been now hadn’t you played in Faust?

I don’t know. Probably still in Sibiu, playing the same parts, with the same enthusiasm, but not having this interview.

I heard this legend: that Purcărete noticed you when you were playing- exceptionally- the part of the hen. How true is this? How was it?

I was playing in Silviu Purcărete’s “Pantagruel’s Cousin”- among other parts, that of a hen. But it was his performance…so it would have been hard not to notice me.

Some of your theatre colleagues consider you the best actress in Romania, or at least the most dedicated. Do you agree?

If you love theatre you cannot be satisfied by simply working as an actor. It hurts if you don’t at least try to be an artist, in whatever part you play. I think I’m not the only one to see things this way.

OFELIA POPII IS A PERSON WITH MANY DOUBTS AND QUITE  STORMY

How did it feel to receive an acting award at the Edinburgh festival, where normally there are no awards for actors?

What did the awards mean to you?

Recognition gave me a minimum confidence, but also made me relax a bit, and that I needed- since I’m a person with a lot of doubts and quite stormy.

You were awarded by UNITER in 2008? Did this change your life? How?

It surely shone « light » on me, it brought me into the attention.

I don’tknow if it was more precious, but it was important that, after „Faust” I came up with another performance that was so much appreciated. It eased of my burden. Because it could have meant: you can’t do more than that. After “Slices” I realized I can do more than I’ve done so far, I felt that “Faust” was not the end of the road. Now I hope it’s not “Slices”…joking, of course. For me it’s very important for me to search and in “Slices” I searched, together with Lia Bugnar, in another direction than “Faust” and our search was very much appreciated. And yes, I was happy. Now, I am waiting for other challenges, the following part to gratify me.

You fell in love with your husband while rehearsing “Hamlet”. He was playing Hamlet, you Ofelia. Was it really like that?

Yes, it’s true. But we started being together after finishing the rehearsals.

What do you owe to the theatre in Sibiu?

Here I fulfilled my dream of doing theatre. I guess, I owe everything.

What about Sandi, the prompter?

Sandi is my friend, since I came to Sibiu. She has so many years of experience in theatre and she has a very good critical eye, she knows how to encourage me, exactly when I need it. I do consult with her for all parts, almost- with her and the director. But she doesn’t help just me, she gives advice to anyone asking her to.

OFELIA POPII WOULD BE ACTING EVEN IF IT WAS PROHIBITED, ILLEGALLY, IN BASEMENTS,  IN THE MOUNTAINS

What would you do if tomorrow acting was outlawed in Romania?

I don’t know. I’d try to write or I’d go to another country. Or I’d do theatre beyond the laws, in basements, in the mountains somewhere. That would be nice, I think. Yes, I’d do it illegally.

What is your life without theatre?

What do you mean? What I do when not at the theatre? I try to do lots of things: sports, go to the countryside, stay in the garden, watch films, read, all these things people generally do, I think.

What does the National Theatre Festival mean to you?

It means the opportunity to perform in front of the audiences in the capital city and to meet up with other artists, maybe the chance to see a performance from another theatre.

How do you manage to maintain this admirable double condition, young mother and all your commitments?

I love both states and I am very lucky to have the one and the other.

Do you think you are a model for younger actresses? Or that they envy you beyond the power of admiration?

I don’t think anyone should envy me, I don’t believe in competition, but I think we are different and if jealousy might stimulate you to become better, then I am happy to contribute a little bit to one’s perfection, be it as an object of malice or of love and admiration.

I heard that one of your beautiful eyes turns black (being normally blue) when you are upset not to succeed in a part you play. Is that true? How do your eyes know how well you perform?

Yes, it happened when I was working on „Slices”…

What will you bring to the NTF this year?

I will be playing in Mihai Măniuțiu’s /„The Lesson”, by Ionesco and in Armin Petras’ / „Nathan the Wise”, by Lessing, a performance with a Romanian and German cast. My colleagues will also present Radu Afrim’s -„Buffalos”, and the students in Sibiu come with Bogdan Georgescu’s performance – „Antisocial”…

“Seldom have I gone out of Sibiu, unfortunately. Maybe the future will bring more and more interesting offers and I’ll play in other theatres as well, who knows?”