The Bacchae (without mask) 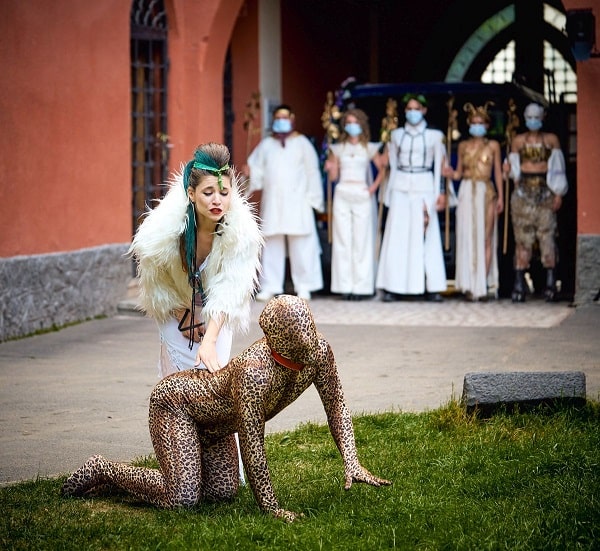 The show has been available for viewing from Tuesday, November 9, from 17.00, until Thursday, November 11, at 17.00. To activate the English translation, press the CC button at the bottom of the video.

What better time for the descent of a God among men than the turbulent times of today? The Bacchae (without mask) is a modern rewrite of Euripides’ play, Maria Manolescu managing to transpose this ancient text into the present. The effervescence of Euripides’ tragedy is presented with the help of the followers of Dionysus (the Bacchae), but also through the ambiguity of the origin of Dionysus, a man or a God.

Placed in a public square, the action reveals Dionysus under several human typologies (the strong, the young, the bully, the mask and the sexual worker), and the chaos created among those present is mainly meant to reveal the most common forms of choice that modern society has at hand.

Dionysus plays with the minds of those present, who are no longer able to think for themselves, lusts them with ideals, tricks, with alcohol, with everything he has at hand. Tensions rise as an anti-mask protest grows in the public square, the ideal time for Dionysus to climb on the suffering and discontent of the masses and lead the action to a tragic ending. The Bacchae successively render the voice of the Romanian diaspora and the anti-mask voices. Everything is intertwined to make you think of the recent events in Romania. Without the social and the political being antagonized, the show is an opportunity to bring into question, objectively and as detachedly as possible, the limits and freedoms of our times.

“I was fascinated by the way the utterly powerful text of Euripides seemed to talk about the context we have been living in for the past months: about the way we all fall way too easily to attempts to create dissension, and attack each other from behind our ideological masks; about frustration, protests and repression; about the feverish ways of crowds and individual responsibility; abut consequences and the forces that control us without us having any clue about that.” – Dragoș Alexandru Mușoiu

“If the god Dionysus would be born again, that is for a third time, during this age of ours, what shape would he take? And how would he get his revenge this time, on the ruling family that despises the working Maenads who have been let down by the authorities? The Bacchae (without a mask) is a one on one rewriting of Euripides’ Bacchae but during pandemic times, with all their masked or maskless protests.” – Maria Manolescu

“With this rewriting of Euripides’ Bacchae, Maria Manolescu generates a questioning of the limits of freedom in the name of toxic ideologies. Without it being a mimetic actualisation, the text of this performance keeps the spirit and the characters of ancient times, reflecting them on the background of Romanian social protest movements we’ve had in the past few years (…). Maria Manolescu puts her signature on a rich text, with multiple references and powerful cultural meanings, it all being powerfully directed by Dragoș Alexandru Mușoiu’s direction.” – Oana Cristea Grigorescu, „Protestele ca sărbători populare”, revistascena.ro, 11 June 2021

“An exhilarating performance, marvellously designed in every detail, which challenges and incites to a fertile dialogue of ideas. For the maskless Bacchae it is truly worth it to get in your car or get a plane or train ticket and sit comfortably in a chair within the inner courtyard of the Art Museum in Satu Mare. Besides the courage and the desire for innovation of the duo Dragoș Alexandru Mușoiu – Maria Manolescu, you can feel the professionalism and the talent of these two, characteristics without which success would not have been reachable. The team of the North Theatre in Satu Mare accepted the challenge and thus brought on stage this unique performance.” – Nona Rapotan, „Arhetipul protestului și dimensiunile sale estetice”, bookhub.ro, 7 June 2021 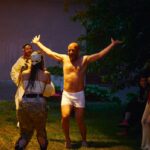 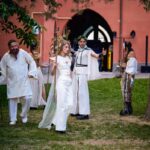 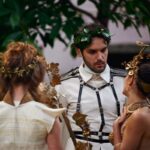 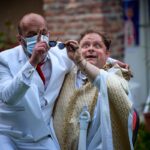 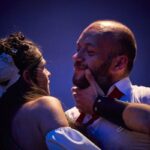 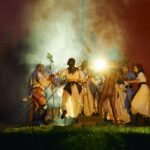 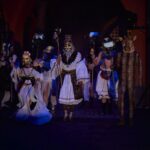 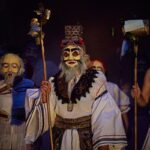 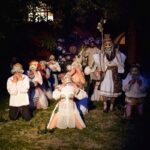 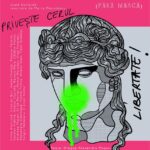