One CLICK and… 1000 realities. New Media in Romanian Theatre 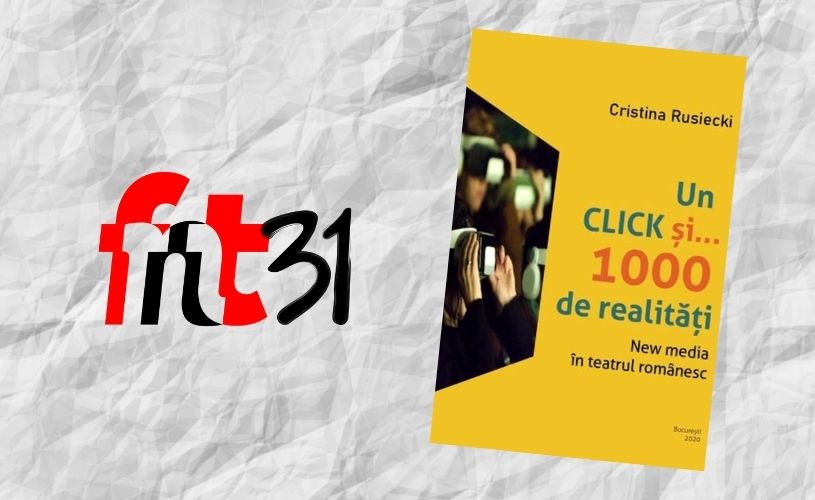 The book can be purchased here: by receipt of payment to the account of Asociația Entheos, IBAN: RO06BRDE441SV35956454410, please mention „For Un Click”. Please note the phone number and address for delivery of the book. For addresses outside of Bucharest, delivery will come at an extra cost

Analysing almost forty shows from the last fifteen years, One CLICK and… 1000 realities. New Media in Romanian Theatre by Cristina Rusiecki was conceived on two main directions. The first refers to the performances tackling themes generated by the explosion of virtual space media, by the mutations that they cause in the contemporary sensitivity and in the perception on the world. One of the topics addressed is the abundance of online communication, of the relationships created in the virtual environment between partners with false identities. What are the results of this type of fast, uncensored communication, in which each participant projects his own representations about the others and in which emotions and reactions pervade unverifiable icons and standard smiles, in absence of physical closeness.

The second direction developed in the book aims to analyse the ways of using new media, in recent years, in Romanian theatre: video projection, digital sound, space-installation, intelligent lights, object theatre, silent disco, holograms, etc. The book offers an analysis of the semantic functions these means have gained, one by one, in the evolution of Romanian theatre in the last fifteen years. The author appeals, whenever possible, to the points of view and explanations of artists who constantly employ the instruments mentioned: directors Bobi Pricop, Carmen Lidia Vidu, Ana Mărgineanu, set designers Andu Dumitrescu, Adrian Damian, Irina Moscu, Mihai Păcurar and actors confronted with usage of those respective means, such as Toma Dănilă, Diana Lazăr, Ada Galeș or István Téglás.

It’s a well-known fact that for the world of theatre and for theatre spectators the visual image is at least as important as the word. We are wired to extract information from images. Printed in good graphic conditions, One CLICK and… 1000 realities. New Media in Romanian Theatre was conceived as a full- colour album in which wording and illustration are given equal value. The book is completed by an index of shows and creators, in order to ease and quicken access to information related to certain themes, fields, ways of artistic expressions etc.