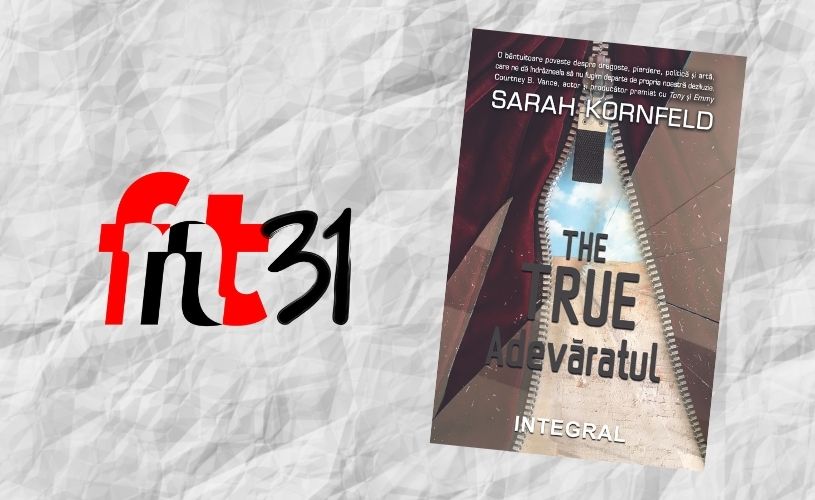 In 2019, the world-famous Romanian theatre director Alexandru Darie died; the news came as a shock to the creative world. Bringing Darie and Romania to life, The True also tells the story of a brave woman who goes through a web of lies, including global corruption.

The True is a hybrid of memories, real crime, self-fiction. Integral publishes the book in three languages ​​(Romanian, English and French). The True will have a continuous release (October 28, 2021 for the Romanian and English editions and November 25, 2021 for the French version) and the complete, trilingual package released on December 9, 2021. The trilingual edition will be launched as The True: A Trilogy of Ghosts. The book has three different endings, each translation being an extension of the chaos of Kornfeld’s experience.

Kornfeld and Darie were lovers in the 1990s; after the breakup, they remained close friends. When Darie died, Kornfeld came to Romania to look for the reason for his death. There he met a young Romanian woman who claimed to have been Darie’s girlfriend. For two years, Kornfeld wrote a book about Darie’s death, signed agreements with Netflix and Disney for screenplays about Darie (and other projects), all to devastatingly discover that she had been deeply misled by a scammer.

Readers of books written by Anne Carson, Claudia Rankine and Chris Kraus will love The True. In a post-truth world, where objective standards of truth disappear, The True limits the slips in between facts, opinion, and faith. Having spent her early life in experimental theatre in downtown New York City, Kornfeld draws her language from Molière to Patti Smith, from Beckett to Maria Irene Fornes, from the intimate inside of her theatrical family and friends.
The True is a compelling, disturbing and painful, sincere story about the world we live in now – a world of fake news and alternative facts, in which we believe what we want to believe and ignore or deny the overwhelming voices that tell us the opposite. It is also a story about theatre – the most ancient art of disguise; a world of fireworks, in which nothing is exactly what it seems, in which one ends in deceit while search of deep truths. And it is also a story about Romania and about the twisted-western vision of this eastern nation… But in Kornfeld’s skilfully written story, there is sympathy even for the devil. The True attracts the reader with his dark poetry and then refuses to let us go.

The book is a shocking testimony about a reality that we, living in Romania, still refuse to acknowledge. It reflects the strange, inexplicable, painful feeling we have when we think about how our society is built. It reproduces the secret, the lie, the resentment, the primitivism, and the syncretism in which we live. At the same time, the book is about the struggle of a modern woman in the 21st century, about her memories, feelings and past, but especially about her truthfulness. A lesson of sincere self-analysis, which also contains the true truth about us here.
It should give us the courage to tell more.

The True is a funny, tragic, essential warning story for our post-truth era.

Jendi Reiter, author of An Incomplete List of My Wishes: Stories

Kornfeld’s lucid prose approaches the heart and gives an acceleration of the whole crazy story, even as we watch it all unfold. The downward spiral has a sprawling attraction. I couldn’t put the book down!