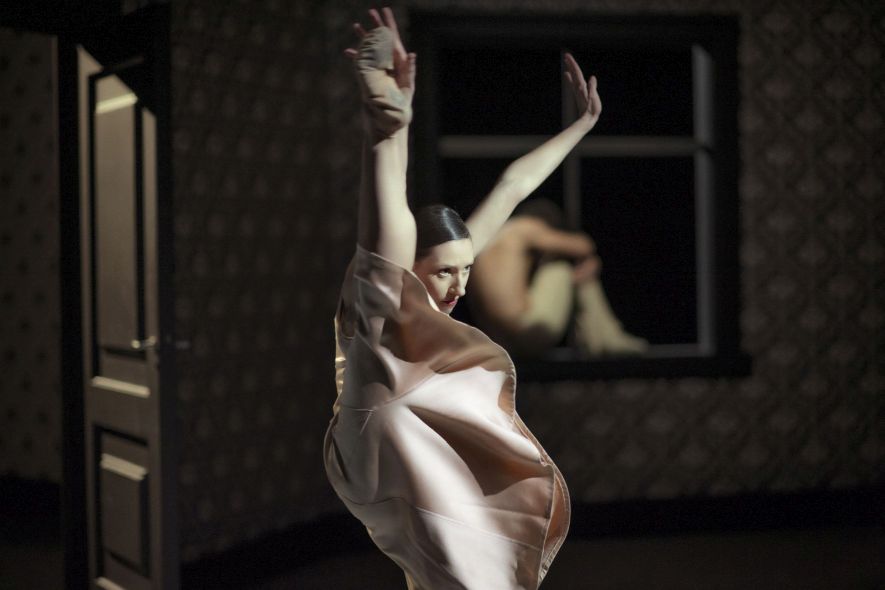 A production of Nederlands Dans Theater (NDT) – The Netherlands

Shoot the Moon revolves around a higher level of expression in relationships. It is about the one thing that can create or change it: the emotions hidden inside. Revolving walls with striking black-and-white wallpaper create three separate rooms, each containing its own love story. The door to the other room always seems to be open and through the window a new world beckons.

The songs You and I and The Way Young Lovers Do by Jeff Buckley, who died tragically and young, deal with love in different ways: the first is slow, with very stretched-out vocals; the second has fast, almost hectic guitar accompaniment. Both songs form the basis for Marco Goecke’s choreography Woke up Blind. The two female and five male dancers are drawn into an acoustic world in which they excel in contesting with Buckley’s vocal power and his frenetic guitar sounds. Like young lovers, they throw themselves into the unknown regardless of the consequences, driven purely by longing. In Woke up Blind, Goecke has once again managed to reach the core of human emotions through pure, highly complex movement. (Nadja Kadel)

The Statement is a wedge of realism; cold and current. We recognize both the characters and the language as being of our world and our time. The Statement is a one-act play, with four characters locked in their own battle for control, and with the morality of their actions: they have been tasked with fueling a conflict in a distant country. Character “A” declares, “For generations they’ve been fighting. All we did was use it. We used it as an opportunity – the attacks – for investment. For growth. We used it.” Now, being asked to take responsibility for their actions in order to exonerate their superiors, a conflict is rising within their department. (Crystal Pite)

“When you put your heart on the table, be ready to have it crashed. It’s when life breaks in, a stream of pain, passion, sensation… everything for sensation… we want to feel, we want to live, we want to push far into the suffering, the beauty, the vodka, the TV, the dance routines. Fuck poetry, only Vladimir can save us.” (Facebook)