class="">Bush Moukarzel, co-director of Cekhov’s First Play: “Art isn’t like a pair of scissors, which either cuts well or it doesn’t”

Bush Moukarzel, co-director of Cekhov’s First Play: “Art isn’t like a pair of scissors, which either cuts well or it doesn’t” 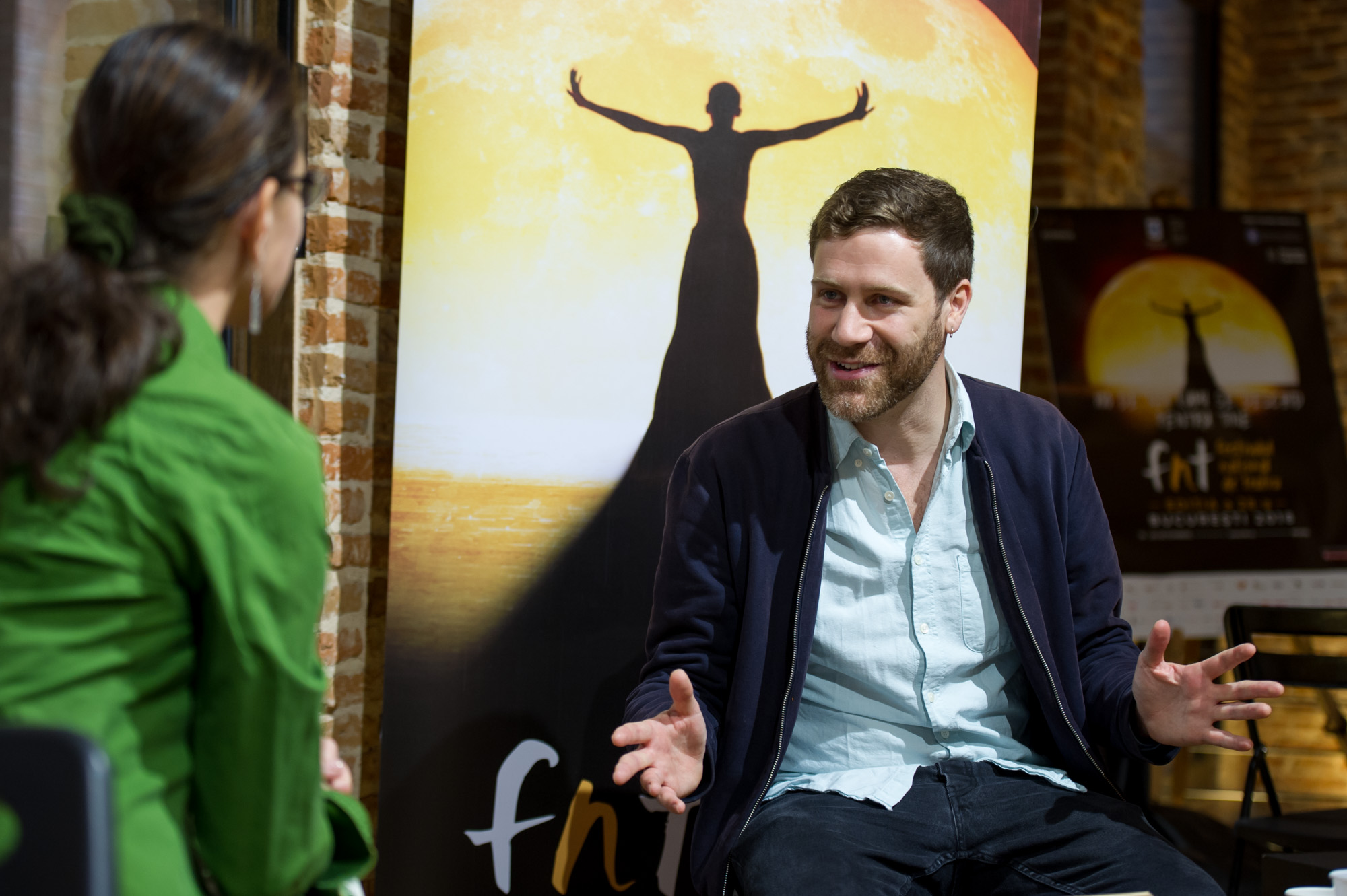 Besides having a Master of Philosophy in Psychoanalytic Studies and having played and also directed at the famed Berlin theatre Schaubühne, among other projects, Bush Moukarzel is the co-founder and co-creative director (alongside Ben Kidd) of Dead Centre, a theatre born in 2012, “based between Dublin and London”. All four productions of this young company have already toured in Europe and the U.S. Their latest production, Cekhov’s First Play, was presented at this year’s NTF in Bucharest, sparking a vivid interest and also a bit of intrigue related to its main character, Platonov.

Bush Moukarzel is both the director (together with Ben Kidd), an actor and the (at times mischievous, other times puzzled) storyteller in this performance, that tackles Cekhov’s first, quite cloddish play in a creatively funny way, only seemingly iconoclastic but actually lovingly challenging towards Cekhov and the perception of the audience about the “Cekhovian spirit”.

First of all, what kind of a ”Dead Centre” are you?

One of the reasons for our name is that, in theatre in England and Ireland we talk about “stage left”, “stage right” and the “dead centre” of the stage, which has a sense of position and exactness. But our name also has to do with those situations when you feel at the centre of the stage and the world – then maybe there’s something wrong with that and you’re actually in a black hole in a “dead” centre.

In Chekov’s First Play, what was your intention behind deconstructing and playing with what some might feel as Chekhovian specificities?

Well we took Platonov, who in the play is a man who speaks a lot, and me made him be completely silent, played by an audience member who doesn’t know the line, where to go, what to do. It’s like a game of Jenga (the unstable tower), where you remove one element from the structure and then maybe the whole things fall apart or maybe you get a new, fragile structure. Our show is in fact a love letter to Cekhov, not an attack. Like in a family, when you love somebody, you argue with them and push them, precisely because you love them so much. That’s why we played around with Cekhov.

This first play of his was written when he was 19. The full text, if played whole, would be about 7 hours long, but those who do that are sadists, and we’re not, we’re very childish, myself and Ben Kidd. So, we both decided we would interrogate the spirit of this play, its incompleteness, the fact that it is unfinished and somehow inconsistent. We thought these are good things, because it’s exactly how we feel ourselves. The masterpieces of Cekhov, like The Orchard, are simply perfect, whereas this first piece (known as Platonov, but it actually has no title) needs help, it’s Cekhov’s “ugly duckling”, an unfinished play for unfinished people, as we said.

How did you hope this approach would be perceived by the audience?

Our intention was simply freedom We don’t believe we know more than they did, the people watching a theatre performance in the 19th century. All these games within our show aren’t to suggest that we have a deeper philosophy than those original audiences or Cekhov, but rather our way of saying that we need new forms to get to the old ideas and truths. We know nothing more nowadays, Cekhov wrote about universal truths – wondering what your place is in the universe, the confusion regarding the social order (whether it is collapsing or functioning), the expectations of people, the topic of freedom, the role of women, all these are the same struggles then and now. But the way we tell these stories has to change nowadays to get the same information.

Your Platonov is a very surprising and always shifting character, as each time he is played by somebody chosen from the audience.

This is our little secret, indeed. Right before each performance we go out and pick somebody random from the audience in front of the theatre. I just pick a man or a woman, ask them if they’d like to be the main character – if they say no, or that they are professional actors, then that’s fine and I ask somebody else. We show them only where to sit in the audience, because they’ll have some special headphones – and apart from that they know nothing. We look precisely for that element of chaos, the anarchy of the unknown, we never know how it will turn out. So, the beauty is to bring unpredictability and uncertainty within a type of formal art.

Challenging expectations and desiring the unknown as a strategy?

Yeah, I think that’s important, it’s not just sort of a game but it has to do with a narrative and a feeling of uncertainty. The Platonov character is somehow strange, uncanny, neither he/she nor the audience know exactly what’s going to happen. For the other characters we really made this uncertainty literal – is the person you’re speaking to really who you think they are, or are you just projecting your own stuff on them?.. The audience hear me speak during the performance, imagine or presume that I know it all, being the director of the show, but that too is actually mostly their projection. This matrix of expectations and fantasies is what we play with. Cekhov was interested in these ideas too, he had for example the idea of the impostor syndrome, some protagonist saying ‘I’m not who you think I am’.

Do you have any particular hope regarding the reaction of the audience?

I hope they… are nice to their mum when they go home. Just kidding… I always give a funny answer to such a question because, if I did have a certain expectation that the show is perceived in a specific way, there would really be no reason to make the show. Anticipating the effect a performance will have… you see, this is not like with a product, a pair of scissors for example: if it cuts well, then it’s a success, if not, then it’s a failure. Art isn’t like that, it doesn’t have a clear function. So, I don’t know what the reaction is supposed to be. Of course, the basic ambition is that you want people to feel you’ve showed them something they have never seen before, because then the result will be interesting, people will feel alive and be reminded of their own idiosyncrasy, that they are like nobody else, that we all are exceptional in our individuality.”