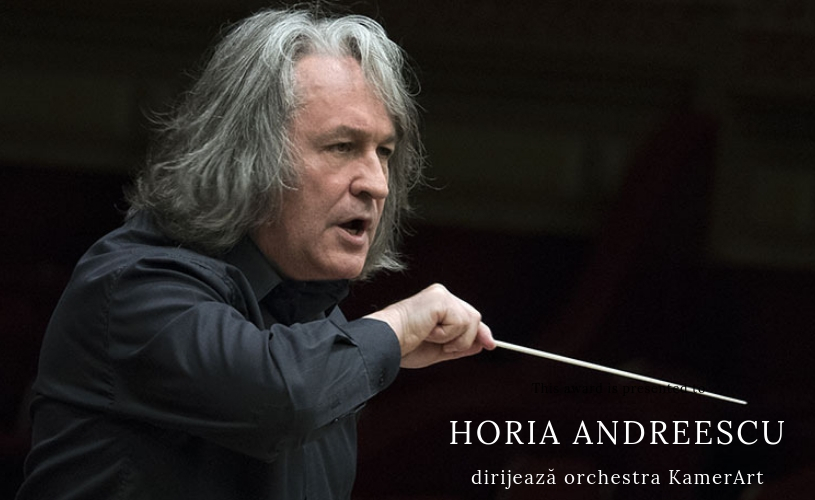 KamerArt Orchestra is a chamber ensemble made up of some of the most talented young Romanian instrumentalists. Their value has been proved by over 300 national and international awards. The young musicians collaborated with famous orchestras such as Royal Concertgebouw Orchestra, the National Radio Orchestra, the Violoncellissimo Ensemble, the Royal Chamber Orchestra and Kamerata Stradivarius, while most of them are members of the National Youth Orchestra of Romania. They have had numerous concerts and tours, and have played on famous stages of Romania, Germany, Austria, France, Italy, Spain, China and Singapore.

Along the members of KamerArt Orchestra, we shall mention musicians such as Cornelius Zirbo, Alexandru Spînu, Nicolae Dobrovicescu, Constantin Mușat, Andrei Radu and Izabela Ghergu, all of whom have had remarkable achievements as soloists or playing in chamber ensembles all over Europe. They have attended masterclasses and have had the chance to work with famous musicians, among them Gautier Capuçon, Silvia Marcovici, Mihaela Martin, Peter Stark and Gábor Takács-Nagy.

KamerArt was founded in 2017 and their first concert was hosted by the “George Enescu” Hall of the National University of Music of Bucharest. Following that concert, the young artists were invited to tour Greece in May 2018. The two concerts making up the tour welcome them in sold-out halls where over 700 people were charmed by their technique and subtlety. The concerts of the KamerArt Orchestra were appreciated by music lovers and praised by music specialists. Chamber music means more than intimacy and professionalism. First of all, it means great skill, impeccable technique, absolute virtuosity.

“In order to make this project come true, each of us offered a part of their soul and mind, and that is how we have built it together as a whole to which we all took part. I believe that the enthusiasm and madness – in its positive meaning – are the main values that define us. I often feel overwhelmed by such rich and various feelings when around the orchestra. What I am most convinced of is that, together, we have carved a mountain of feelings, we have shaped this common state which I can only translate as KamerArt.”

All concert ticket revenue will be donated to “Dăruiește Viață” (“Give Life”) project.