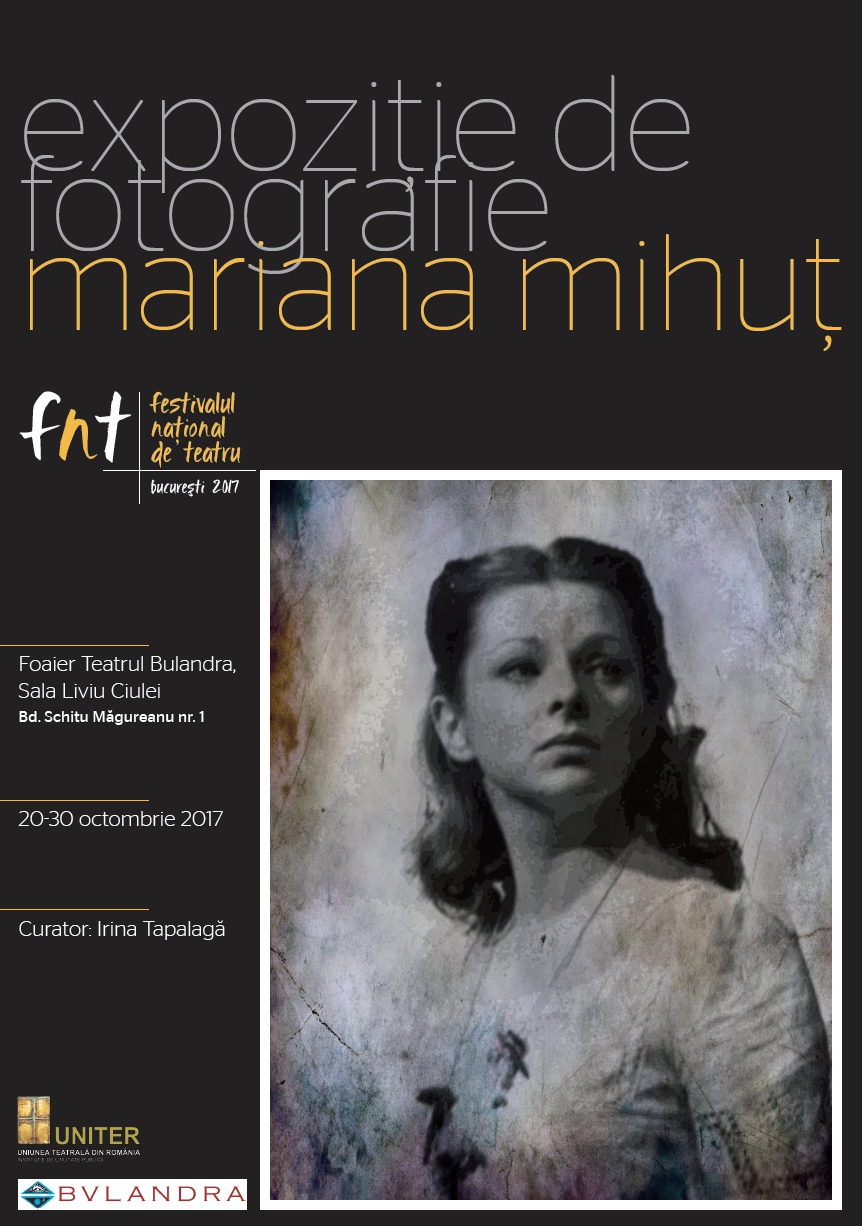 Bulandra Theater. Toma Caragiu Hall.  A place that is enriched by the passage of the vast personalities from the theatre world. The foyer that is underneath the former Theatre Institute – a space of consistent memories and experiences from the years of glory of the formation of the solid core of Romanian theater.

Mariana Mihuţ – a sensational role record. My attempt to infer the ones who have a “soul”, next to the very big ones.  In the archive – small photos of big roles.

First of all, it is a restorative work of many ancient, truncated, unclear pictures. Then comes the selection and the attempt to “tell” as much as possible, to let the viewer understand what cannot be seen at first glance. Large roles and partners to measure. Significant directors who, at that time, made elite distributions.

The stakes of the exhibition are the size of the prints and the diversity of the characters played. It is a gallery of Mariana Mihuţ, Hypostases. A fluid route along which another surprising, fantastic, new Mariana Mihuţ is added again and again, photo by photo. A woman of unbounded beauty and femininity, an actress who is totally devoted to her role, completely absorbed in that living. Early career pictures – an ingenuous, pure beauty, with all open pores, absorbing everything. The roles assemble, they sit, facets start to show, the surprise appears: Mariana Mihuţ can be serious, blunt, sometimes harsh. She is the clear example of an actor who gets into the role, just like how you get into another world where you do not belong to yourself anymore. Where your role inhabits you. That is what the pictures suggested to me.

Oversizing the photographs has its climax in the big printed surface with images from The Storm. Mariana Mihuţ looking over her shoulder. To what? To herself, maybe. An unforgettable beauty for whomever saw her in a performance, perfect and unwavering in this emblem-role.

But the dimension of this great actress is seen today, when, perfectly adapted to the new trends in the field of performance, she is desired and cherished by current directors. Today she is playing on stage with the same love, passion, total dedication. With the same beauty. (Irina Tapalagă, curator)

SEE OTHER EVENTS ON THE SAME DAY
Exhibitions, Shows|